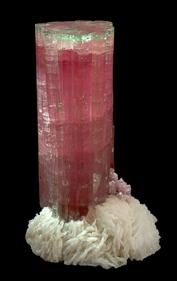 One example of a Tourmaline crystal
(it comes in many different shapes and colors).

Tourmaline is prized as a beautiful, semi-precious gem.

Now, as a mineral, it has become a focus of research at universities and research centers worldwide.

The reason - infrared Tourmaline is the only one mineral to show permanent electricity on the earth and is also a natural (non-manufactured) source of negative ions and far infrared (FIR) rays.

Around 1986, it was found in a research station in Japan that, even though tourmaline was broken down in smaller pieces, a positive and a negative electrode existed on both end of the crystal, and the electrodes never disappeared unless tourmaline was boiled near 1000°C.

In addition, when the positive and the negative electrodes of a tourmaline crystal were connected to each other, it was proven to show low electricity of 0.06mA.

Tourmaline, in your filter, is used to naturally transform water into mild alkaline water, reduce water clustering (what happens to our stored water) and has anti-bacterial and deodorant qualities.

Treated water applied to the skin gives an excellent effect of moisturizing and absorption.

In addition, Tourmaline generates FIR that purifies the water, and acts like a 'supercharger', assisting the water alkalizer to ionize and alkalize.

Tourmaline has been researched and found to activate animal & plant metabolism.

Tourmaline has an immediate and powerful effect on water in the filter with the surfactant effect (makes water wetter) increasing by 101%.

The far infrared energy that Tourmaline naturally emits causes a resonance in the body at the same frequency as water.

All matter is made up of uniquely-arranged electrons and molecules all moving in unison.

When molecules are illuminated with electromagnetic radiation of the same intrinsic vibration frequency as the substance itself, the electromagnetic wave energy is absorbed and the amplitude of that substance's molecular vibration is increased.

That's why when FIR, having the same vibration frequency, illuminates a substance, that substance will filter out the FIR and experience a "resonance absorption." This is a process known as "resonance-absorption to heat-generation" with the aid of FIR.

In other words, the vibration of atoms and molecules will result in resonance absorption.

The seventy-five percent of our bodies composed of water, protein, fat and other substances - all must function properly to sustain life.

When living things absorb FIR of 8 to 14 micron wavelength, they experience resonance absorption. The vibrating movement of molecules in living tissue produces an increase in energy which in turn activates cells and enhances metabolism.

First, radiation: it means it can directly reach human bodies just like light does. For example, sunlight, which is also radiation, reaches earth through the vastness of space.

Second, deep penetration: FIR can reach well into subcutaneous layers of the body (or water) with its deep penetration ability, generating internal warmth suitable for molecule activation in living tissue.

The third feature is resonance absorption: Once illuminated, there is intrinsic vibration of body components - water, protein, fat, enzymes. And, the interior of molecules - atoms and atomic structures - experience the resonance absorption of FIR of their same frequency. This elevation of molecular energy is known as "resonance and absorption."

In summary, Tourmaline and FIR help to provide you with the most healing and beneficial water available and will help to enhance and energize both your physical and spiritual states. The new Biostone filters are exclusive to the latest models from Jupiter Science and are now available through Nature's Alternatives.