The Seychelle Radiation Water Filter Pink Sports Bottle removes the four basic zones of contamination: Aesthetic (Chlorine, taste and odor), Chemicals (from Industry and Agriculture), Dissolved Solids (heavy metals such as lead, mercury, Chromium 6) and up to 99.99% of Radiological Contaminants such as Gross Beta, Radon 222, Alpha Radium 226, Plutonium, Uranium, Cesium 134 and 137. The Seychelle radiological filter also removes up to 90% of fluoride. (Not to be used with salt water)

The Man Behind Seychelle's Mission 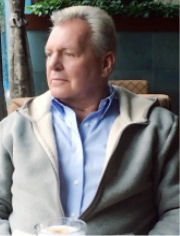 Over the last four decades, Carl Palmer has dedicated his life to the research and development of safe and healthy drinking water through water purification. His vision and hope for our world is to develop products that provide safe and healthy water to all those who need it.

Mr. Palmer has witnessed the crippling and even fatal effects caused by water contamination and has made it his mission to successfully develop a variety of drinking water technologies that remove the contaminates causing the majority of the world's drinking water health issues

Carl Palmer is the founder and driving force behind Seychelle Environmental Technologies Incorporated, one of the most prominent companies in the portable water filtration industry. Seychelle designs, manufactures, and supplies revolutionary water filtration systems, most notably, the Ionic Absorption Micro Filtration, which has been proven to effectively remove 99.9999% of bacteria and viruses found in the world's drinking water.

Carl Palmer has earned international acclaim with the first application of reverse osmosis for residential and office use. Many of his enterprises have had a significant impact throughout the world and have been acquired by major publicly-held corporations, including Coca-Cola, Shaklee and AMF Cuno.

Our Body Of Water 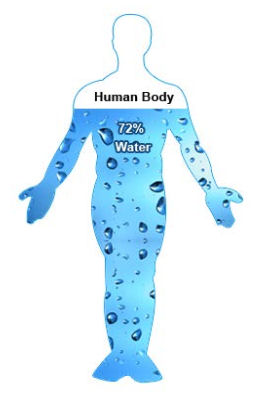 Our water is constantly circulating from Earth to the atmosphere and back again. This is accomplished by the heat of the sun and the pull of the Earth's gravity. When water evaporates from lakes, streams, rivers, and oceans, it condenses and returns back to earth as rain, snow, mist, and fog. This is known as the hydrological cycle. Without it, life would cease to exist.

The moment water returns to earth, it begins accumulating particles of almost everything it comes into contact with, including human waste, animal waste, pesticides, and industry pollutants. This contaminated water then becomes our surface and ground water.

According to the Centers for Disease Control and Prevention (CDC), our drinking water comes from either surface water or ground water. Surface water collects in streams, rivers, lakes and reservoirs. Ground water is water located below the ground where it collects in pores an spaces within rocks and in underground aquifers. Federal law requires that systems reduce certain contaminants to set levels in order to protect human health.

The United States Environmental Protection Agency (EPA) has issued drinking water standards or Maximum Contaminant Levels (MCLs) for more than 90 contaminants. Cities, states, and governments do all they can to safeguard our drinking water and yet safe and healthy drinking water is still a problem.

How Protected Are We?

According to the Environmental Protection Agency (EPA):
"Microbiological and chemical contaminants can enter water supplies. These materials can be the result of human activity or can be found in nature. Coliform bacteria from human and animal wastes may be found in drinking water if the water is not properly treated or disinfected. These bacteria are used as indicators that other harmful organisms may be in the water."

As Reported by the EPA:

Why You Need To Filter Your Drinking Water 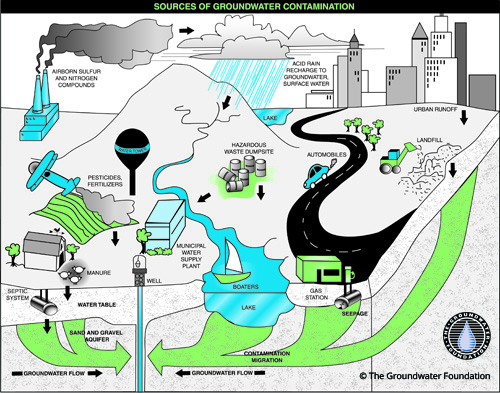 The Zones of Drinking Water Contamination
The A, C, D, R and pH of drinking water:

Over 50% of the United States population depends on groundwater for drinking water. Groundwater is also one of our most important sources of water for irrigation. Unfortunately, groundwater is susceptible to pollutants.

Groundwater contamination occurs when man-made products such as gasoline, oil, road salts and chemicals get into the groundwater and cause it to become unsafe and unfit for human use.

Materials from the land's surface can move through the soil and end up in the groundwater. For example, pesticides and fertilizers can find their way into groundwater supplies over time. Road salt, toxic substances from mining sites, and used motor oil also may seep into groundwater. In addition, it is possible for untreated waste from septic tanks and toxic chemicals from underground storage tanks and leaky landfills to contaminate groundwater.

Drinking contaminated groundwater can have serious health effects. Diseases such as hepatitis and dysentery may be caused by contamination from septic tank waste. Poisoning may be caused by toxins that have leached into well water supplies. Wildlife can also be harmed by contaminated groundwater. Other long term effects such as certain types of cancer may also result from exposure to polluted water.