Source Naturals Ahiflower® Oil is a unique source of omega-3s, which are important for heart and brain health. A clinical study showed that the SDA omega-3 fatty acid in Ahiflower is significantly more efficient in increasing Eicosapentaenoic acid (EPA) levels than the fatty acid in flaxseed. Ahiflower is the highest known non-GMO source of SDA. This product also contains 136 mg per serving of the same beneficial omega-6 Gamma-Linolenic Acid (GLA) found in evening primrose oil. Source Naturals Ahiflower Oil does not contain any fish or animal products, or animal-derived ingredients.

In 2014, the University of Moncton (Canada) clinically evaluated Ahiflower Oil using a randomized, double-blind, placebo-controlled trial. Measured comparison of the accrual of long-chain eicosapentaenoic acid (EPA) in circulating cells between consuming Ahiflower Oil and Flaxseed Oil was ascertained. Ahiflower was shown to be 300-400% more effective than flaxseed oil in converting to long-chain omega-3 EPA in circulating cells. The reason is that SDA bypasses the delta-6 desaturase liver enzyme rate-limiting step in EPA metabolism. Oils rich in Alpha-Linolenic Acid (ALA) like flaxseed, chia, sacha inchi, and perilla contain no omega-3 stearidonic acid (SDA). Stearidonic acid found in Ahiflower oil gives it the advantage of much high conversion to EPA over the other ALA-rich oils listed. Hemp and echium oils contain far less SDA than Ahiflower oil. The clean aroma and taste of Ahiflower oil make it a much more desirable source of omega-3+6 when added to health supplements, foods, and beverages.

Nature's Crops, the maker of AHIFLOWER® brand of Ahiflower Oil is currently engaged in a 5-year human clinical testing program to better understand the measurable nutritional and physiological effects of Ahiflower Oil®.

SDA in Ahiflower Oil converts more efficiently to the fatty acid found in fish oil. Unlike alpha-linolenic acid (ALA), the omega-3 found in most plants, Ahiflower Oil contains stearidonic acid (SDA), the omega-3 which converts more readily to EPA. The body converts SDA to EPA at a rate of up to 30%, compared to a typical rate of conversion of ALA of only 3-6%. Therefore, much larger quantities of ALA oils (such as flaxseed shown in the image below or chia) are required to achieve the same benefit. 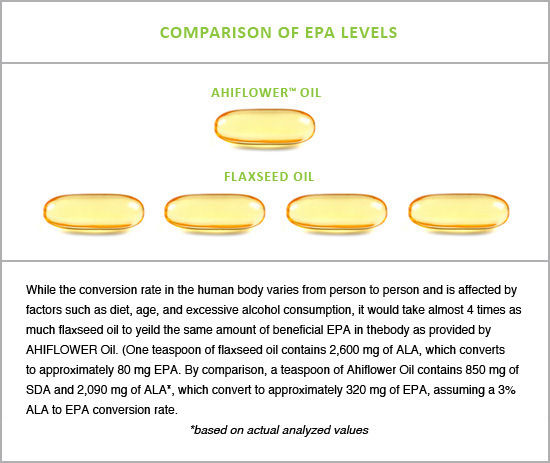 Amid much controversy about fish oil as a sustainable source of omega-3 and the attack on the methods of processing these oils, one acre of Ahiflower produces the equivalent of 80,000 sardines. Between it's superior levels of omega-3 fatty acid and omega-6 GLA, Ahiflower combines the best of both fish oil and evening primrose oil.

Suggested Use: 1 to 4 softgels daily

Warning:If you are pregnant, may become pregnant, or breastfeeding, consult your health care professional before using this product.
Do not use if either tamper-evident seal is broken or missing. Keep out of the reach of children.
Store in a cool, dry place. 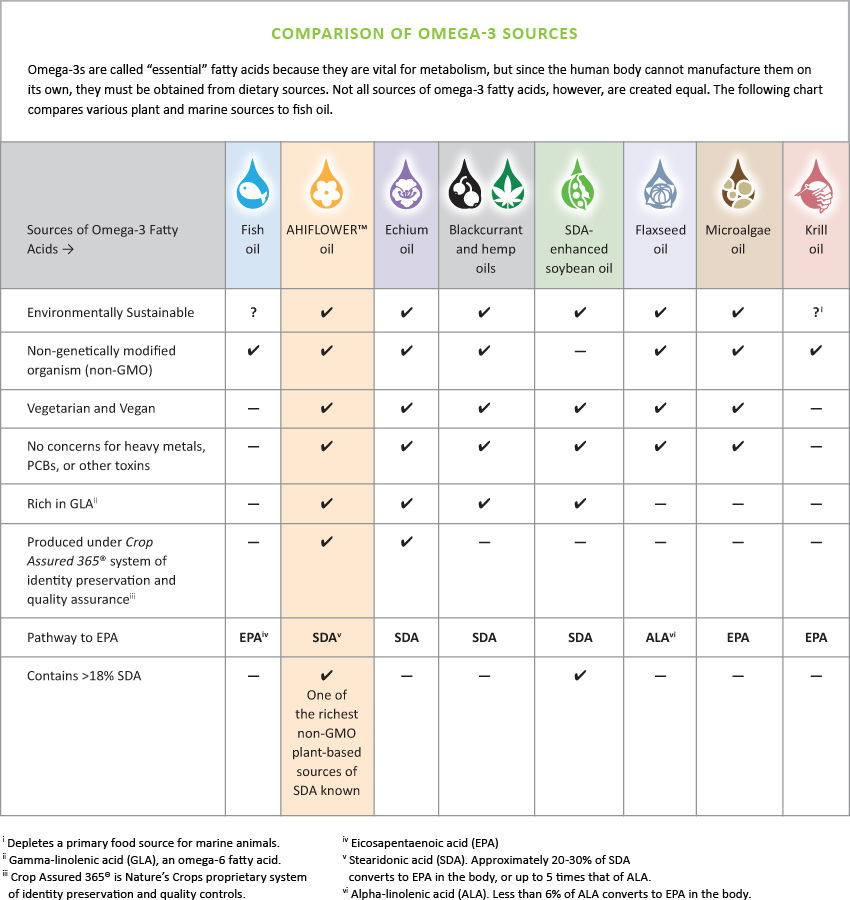